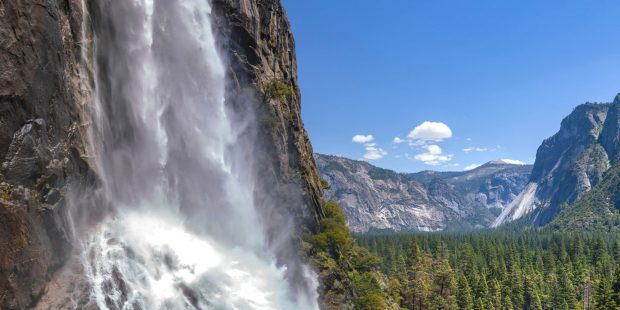 National parks represent the very essence of the United States. These natural areas subjected to scrupulous protection reflect every facet of the vast, complex and magnificently diverse country to which they belong. Everyone has something special, but we have selected 15 unmissable experiences to live in some of the best US parks …

In Yosemite Valley, spearhead of the national park system, mighty granite formations stand out hundreds of meters above the Merced River. Raging torrents are thrown from the tops of the cliffs, giving life to a unique waterfalls show. To preside over everything stand out imposing and iconic sentinels of rock: El Capitan, Half Dome, Royal Arches, Three Brothers and Cathedral Rocks. Regardless of the summer crowd, the view of Yosemite Valley is so wonderful that nothing and no one can distract you.

The Going-to-the-Sun Rd, in Glacier National Park, offers motorists with a strong nerve a unique experience. Set on the side of a mountain and flanked by some of the most dizzying slopes of America, this spectacular 53-mile (85 km) stretch of asphalt gives access to some of the most impressive vantage points of the Rocky Mountains.

Among the many places in the world to admire the sunset, few are up to the Grand Canyon, in particular seen from the Lipan Point. If you are looking for moments of relaxation, treat yourself to a drink on the swing on the patio of the El Tovar lodge, where you can enjoy the twilight in style.

Running downstream from its source in Jackson Lake, at the foot of the majestic Teton Range, the impetuous and evocative Snake River is immersed in some of the most spectacular mountain landscapes in the country. Not only for the mountains itself (like the Grand Teton, which reaches 4197 m), but also for the remarkable heritage of flora and fauna. Numerous operators offer river excursions, from the quietest to the most adventurous ones: whatever you choose, be prepared to be amazed.

Whether you are a beginner climber or boulder champion, you will enjoy the granite walls of Joshua Tree National Park. With its 8000 equipped routes, this is an undisputed world-class climbing paradise. There are courses for beginners and with over 400 walls, veterans will find their teeth. Among the massive rock formations and climbing climbers, the unusual plants known as ‘Joshua tree’ give the landscape an almost supernatural appearance.

Whether you arrive at the top of its 4346 meters or you just admire its magnificent glaciers from below, Longs Peak is always a really great show. Those who try the climb along the Keyhole Route must first face a thrilling ledge (Ledges), and then reach a depression (Trough) and a narrow passage (Narrows) which finally opens onto the sweaty finish line (Homestretch).

Claustrophobia ban: you are about to dive into a slot canyon, a very narrow canyon over 600 meters deep. As you ascend the Virgin River, get ready to get wet, while the steep vertical walls around you tighten more and more, becoming taller and narrower, until, finally, you get to Wall Street, the point where the gorge is less than 9 meters.

For how many documentaries you have seen on TV, nothing can prepare you for the first time you spot a moose in its natural environment. And to avoid seeing a moose in Yellowstone National Park, or a bison, a herd of deer or a bear, you will have to blindfold your eyes. With the Galápagos, the Serengeti and the Brazilian Pantanal, the Yellowstone is one of the best places in the world for wildlife. Big mammals are everywhere and knowing that there are also grizzlies, wolves and mountain lions makes it even more exciting.

Catching the nation’s first rays of sunshine from the top of Cadillac Mountain is without doubt one of the best ways to start the day. At 466 meters high, Cadillac Mountain is the highest point on Mount Desert Island, Maine, and offers sublime views of the Atlantic. The island is one of the most eastern points of the United States and, although technically it is not the first place to be kissed by the rays of the sun in the morning, we prefer to do like all the others up there at dawn: put aside the fussiness and enjoy of the show.

An expression of the infinite creativity of nature, the ‘fairy chimneys’ are among the most bizarre rock formations in the world. From the edge of the Bryce Amphitheater, in southern Utah, you can see thousands of such ancient rock spiers towering over the so-called Silent City, a group of fairy chimneys so vast that it feels like you have landed on another planet.

You may also like: Things to do in South America

Long live the rain! It is she who makes this temperate rainforest, from the Tolkien beauty, one of the greenest places in North America. With an annual average of 4300 mm of rain, it is also one of the wettest regions. The incredible abundance of water favors the development of mosses, lichens and ferns, and the trees have hair so thick they trap the ground in a constant twilight from twilight. Pack your raincoat and go looking for Roosevelt deer.

The third largest national park in the country is a paradise for kayaking and canoeing, crisscrossed by aquatic ‘trails’ that wind through mangrove forests and freshwater marshes teeming with animals. Crocodiles, alligators, turtles, cormorants, herons, egrets and fish of various species are just some of the creatures that you might encounter while paddling in this subtropical oasis. Thanks to the convenient route maps, distributed (free) by the National Park Service, finding your way around the park is quite easy.

An ancient engineering marvel, the largest rock settlement in North America consists of 217 rooms and 23 kivas, once inhabited by communities of 250-300 people of the so-called ancestral pueblo. It is accessed by a one-hour visit led by a park ranger, descending a stone staircase and four 3-meter long ladders. It is a wonderful place where to try to reconstruct the clues left by its inhabitants, who abandoned it in 1300 for reasons that are still almost unknown.

The adventurous kayak trips in the coastal areas of Alaska, where the tidal fluctuations are very large, the icy waters and winds and waves can rise and swell, offer the opportunity to reach areas like the Muir Inlet in Glacier Bay. Wherever you go, the feeling that an iceberg is about to break away from the various glaciers that descend into the sea is constant in this vast park, where even humpback whales, black bears, seals and white-headed eagles are spotted.

The Mt Rainier is covered with glaciers and high-altitude meadows are whitened for nearly nine months a year. But when the snow finally melts and the underlying meadows emerge, the wild flowers bloom giving rise to an explosion of colors. Dog teeth, bear grass, platantere, pyrolettes and dozens of other species turn the slopes of the highest peak of the Cascade Mountains into a rainbow.