A classic British, science-fiction television series using electronic puppets/marionettes, these characters are spearheaded by Jeff Tracy the widowed father of five adult boys, Scott, Virgil, Alan, John and Gordan.  The Family all live and work together on the secret Tracey Island hidden in the South Pacific Ocean.  They are known as the organisation “International Rescue” dedicated to saving human life. The family have access to some very high-tech equipment including several technologically-advanced vehicles called the Thunderbird machines. Each Tracey brother has the specific use of one of these vehicles, they sit in their individual Operator Chair waiting for instructions from their father. Their mission each time is to stay cool, calm and composed.  Defeat the enemy and return to base in their vehicles seated in their ultra-safe Operator chairs for staff. 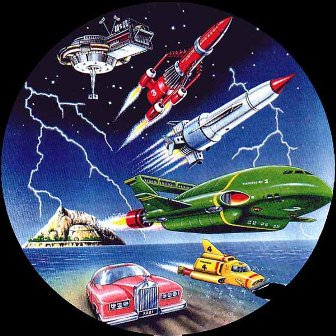 Piloted by brother Gordan and usually launched from Thunderbird 2 is the yellow submersible Thunderbird 4.  The gold and grey Space station that relays distress calls from all across the World is alternately manned by Alan and John and is known as Thunderbird 5.

Possessing powers of dark-magic and hypnosis and operating from the jungles of Malaysia is the Tracey Families arch nemesis known as “The Hood”.