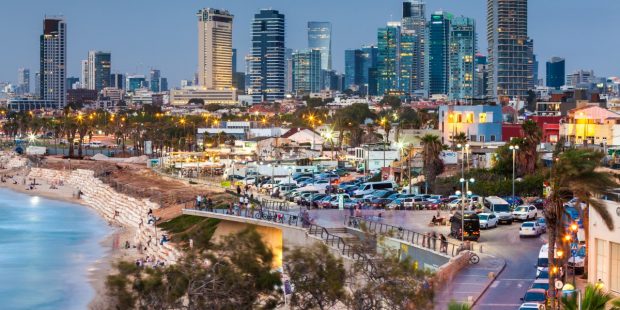 Do you want advice on what to see in Tel Aviv? Are you on the hunt for design and beautiful architecture in the most cosmopolitan city in the Middle East? Here is what is right for you!

What to see in Tel Aviv if you love design and architecture?

Tel Aviv means “spring hill”. It was chosen in 1909 as a new settlement destined to welcome the population of Jaffa, now saturated for its small size. The city has always been in step with the times, in contrast to what historically Jerusalem represents. In just over a century, it has made its way and today it is an essential destination when it comes to contemporary. Therefore, here are some tips on what to see in Tel Aviv for an unusual day between architecture and design.

A manifestation of the artistic fervor of the 1930s, the former cinema (now hotel) is the concretization of the enslavement of the principles of the German Bauhaus to the Middle Eastern socio-climatic conditions. In those years, the arrival in Tel Aviv of German Jewish architects, fleeing racial laws, decreed the birth of a functional style that later earned the city the nickname of White City. The facade follows, with its soft lines, the course of the square. On the ground floor, a portico on pilotis creates the entrance area, also emphasized by the strong overhang of the attic on the first floor. On the upper floors, the ribbon balconies have continuous horizontal slits, functional for the ventilation and the air circulation.

Infinite floors, handled like layers of a sheet, are stacked; undergo enlargements, deviations and twists to define a completely unusual volume, with the appearance of an iceberg. The facade has strip windows that fit into spaces generated by the protrusion of the floors, covered in dekton material, a mixture of minerals and components, subjected to high pressures and temperatures. This material, endowed with extraordinary resistances, is also versatile in its geometries and finishes. Furthermore, the architectural object becomes an urban element, when the volumes avoid the tight consumption of soil, with two towers that are only connected at high altitude and create a park that embraces the entire intervention and in fact fits into it. The project is still in progress and the second part, ToHA 2 will be completed by 2024.

Founded in 1932 and subject to numerous changes of location, the Art Museum only started to occupy its current location in 1971. The latest expansion, called Herta & Paul Amir Building, is linked to the existing one through the Lola Beer Ebner Sculpture Garden of the 1999 and is an architectural masterpiece of adaptation to contextual conditions. The meeting between the need to have rectangular spaces internally to dedicate to exhibitions and the problem of managing the triangular shape of the lot has been transformed into the opportunity to create surfaces with hyperbolic parables that, undergoing twisting, act as a connection between space imposed and desired space. On the inside, the cavedium around which the rooms and connections (Lightfall) are grouped and, on the outside, the treatment of the fronts with prefabricated concrete slabs, which give the volume organic features.

Initially designed by the architect Eli Attia, then relieved of office due to disagreements with the entrepreneur Azrieli, the office complex is one of the most distinctive elements of the skyline of the contemporary city. Three towers, of almost homogeneous height, have different volumes originating from the original planimetric surfaces: circle, equilateral triangle and square. The union is guaranteed by the same treatment of the front panels with dark blue glass cells on a rigorous white aluminum grid. The elongation of the holes at the end ensures a visual closure of the volumes, making them appear less massive. On the ground, the large base that houses a shopping center acts as a glue and sorts the paths.

Now no longer at the center of the religious life of Tel Aviv because of the neighborhood it insists on, which has become purely commercial and financial over time, the Great Synagogue was built in 1925 by Yehuda Magidovitch, in full bloom of the Bauhaus. At the end of the 1960s, in a push to modernize the city’s image, the entire building was wrapped in a new reinforced concrete structure. Although the intervention is quite evident, the addition is far from being heavy, thanks to the opening of full-height arches and the circular holes on each span described by the portico. The result is a sculptural architectural work, which winks at the works of Oskar Niemeyer (in particular at the Mondadori Editrice headquarters in Segrate).

These are my tips! What are you waiting for? Now you know what to see in Tel Aviv for an architectural tour!