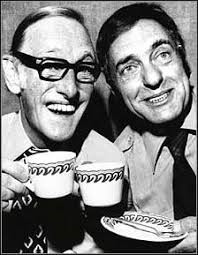 For a time in the 60’s and 70’s a Father and Son team gripped the nations funny bone with their antics and adventures. Written by the incredibly talented writing team of Galton and Simpson, who were also responsible for the marvellous Tony Hancock series Hancock’s half hour, the show was set around to East end rag and bone men who were still somehow able to eke out a living by collecting the unwanted items from people’s homes. They couldn’t even afford a proper van relying on an ageing horse that pulled the cart around the streets of London with the familiar cry of rag and bone. There yard was full of stuff that they had been unable to throw away but there was a very useful tin bath that they used regularly. This used to be the most common way to have a bath but now we can have much better facilities and viewing a selection of some Cast Iron Baths Ireland based company https://www.wilsonsyard.com can offer is a great start. What about old man Albert Steptoe and his Son Harold. 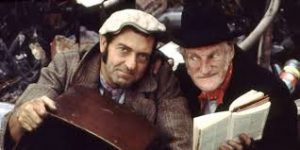 It was a classic example of the chalk and cheese approach to a sit com where you have two desperate characters that really have quite a lot in common. However, with Steptoe and Son there was a definite tragi-comic tone that was a serious undercurrent through the show. Harold was desperate to leave the yard and strike out on his own and make something of himself even though at 37 he is starting to face middle age. All the time he knows that this is never going to happen. His father Albert appears to just carry on without aging just remaining old. He never gets ill and if he does, he uses his pathetic frailness to keep Harold there playing on his guilt. Harold obviously love’s his Father and he does not want to see him suffer but in doing so he suffers and the rage that this causes within him can boil over. However, Albert does love him greatly and in one-episode Albert teaches him the art of ballroom dancing which ends in utter failure as he teaches Harold to dance the women’s part and not to lead making you question if that was not the intention in the first place. The is a great fear in Harold that he will become his Father and the only difference will be that Harold will not have an equivalent to take care of him in his dotage. He wants to be a playboy basically, but time and ability has passed him on.

The show was given extra spite in the performance by the fact that at the final few series the actors Wilfred Bramble, Albert and Harry H Corbett apparently genuinely despised each other though this is untrue. Corbett is supposed to see the show as a noose around his neck and that it stopped him from getting other roles. He is said also to have abhorred Bramble’s homosexuality (he did not) so the “dirty old man!” jibe was said with real meaning.