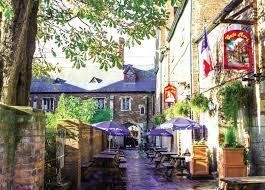 Gloucestershire is a place where many people come to enjoy the beautiful countryside, historic sights and markets fayres in the surrounding towns and villages. Its rural location means it is popular with house hunters looking for a quieter life with a slower pace and Gloucester estate agents tg residential are always busy.

Another thing that many people enjoy in Gloucestershire is the abundance of old pubs and inns – full of history where you can enjoy a drink in front of a roaring fire. But with this comes many ghostly tales. If you are looking for some spooky Halloween stories and are in the area, here are some of Gloucestershire’s’ most haunted pubs…

The Ragged Cot Inn – This beautiful building sits in the beautiful Minchinhampton – but has a dark history. A former landlord, a drunk who attempted highway robbery is said to have killed his wife and young baby here in a rage by pushing them both down the stairs. He was taken away by police but the ghost of his wife and baby are still said to roam the pub and can often be seen at the bottom of the stairs where they were killed.

The Old Bell – This building dates back to the 1600s and was used as a court house. The punishments given to people here were often brutal, and many were sentenced to death so you can imagine that it is teeming with the spirits of the dead! The main ghost that is said to reside here is that of an innocent man put to death wrongly.

The Dick Whittington – This pubs name comes from the fact it was built for the nephew of Dick Whittington himself, Richard Whittington. Built in the 15th Century, it was formerly a merchant’s house before becoming a pub. There have been many reports of hauntings here that have caused workers and visitors to flee – lights floating around the bar area, moving furniture and a hunched figure walking around the pub have all been reported.

Café Rene – This is a great place for a party and is always busy on a weekend – but it is also reputedly haunted. Its proximity to Blackfriars and the St Mary de Crypt Church means that its cellar is connected to these ancient structures. There are many reports of the sounds of monks singing and chanting down in the cellars, as well as sightings of ghostly figures.

Ye Olde Black Bear – In the market town of Tewkesbury, the Black bear is thought to have been established in the 14th Century, although the building that stands now was built in the Tudor period. It is believed to be the oldest inn in Gloucestershire so has a lot of history! The ghost that has been reported by visitors is thought to be the ghost of a soldier who was killed in the battle of Tewkesbury, during the civil war. Dressed in an army uniform, he wanders the corridors rattling chains and without a head!