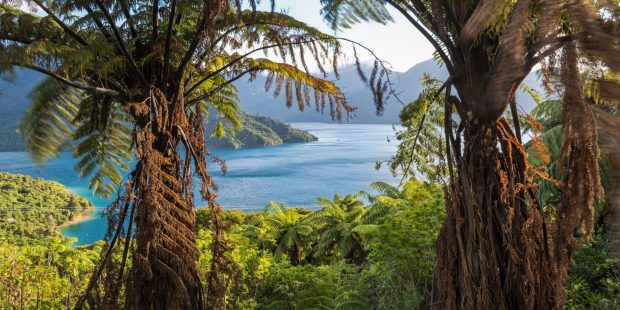 Since motor flights support cartography by providing accurate images of our blue planet, it is universally accepted that there are seven continents: Asia, Africa, North America, South America, Europe, Australia and Antarctica. But what if your school books were wrong? We now have clear evidence that testifies to the existence of an eighth continent almost submerged by the ocean. And no, it’s not Atlantis, the lost city. It is actually a continent that you may have visited. It’s called Zealandia.

With dimensions and shape similar to Greenland, Zealandia (also called Tasmantide, which honestly resembles “Atlantis”) is approximately 3.5 million square kilometers (1.35 million square miles). It would have separated from the ancient Gondwana supercontinent at the beginning of the Jurassic period, and would then detach itself from Antarctica and Oceania about 23 million years ago, like an iceberg detached from the Amery ice platform.

Today, 93% of this eighth continent is submerged, so unless you are a mermaid, the only way to see it is to head south to the Pacific and visit the islands of Zealandia, which, separated from the ocean but connected underwater, remain visible.

The first (namesake) step to arrive in the mysterious continent of Zealandia is obviously New Zealand. Country of origin of the great majority of human inhabitants of Zealandia, it is also one of the most fascinating travel destinations on the planet and is equipped with efficient tourist infrastructure.

If you grabbed a window seat on the flight to Auckland, you will see a city built on a continental mass of 50 volcanoes. Moving from the North Island to the South Island, you can admire the landscapes defined by their volcanic origin, the primordial forests and the extraordinary fauna. But to get an idea of what once was, head to Stewart Island / Rakiura, New Zealand’s third largest island, pushing you just beyond Foveaux Strait from the most extreme tip of the South Island.

The only tiny settlement on Stewart Island is the city of Oban (population of 400 humans), while the rest of the 1570 square kilometers is part of the national park. From the cliffs overlooking the sea to the west, to the more sheltered ports in the eastern part where you can go sailing, kayaking or bird watching, Stewart Island is covered with podocarps (southern conifers) and other trees such as the rimu, which grows slowly, the kahikatea (also called tree-dinosaur) and the millennial giant of the forest, the tōtara. The outback of New Zealand also abounds in the natural landscapes of Zealandia, some of which include active volcanoes. To escape the crowds, a tour of Stewart Island is well worth it.

Is Zealandia part of Norfolk Island or is it an external territory belonging to Australia? The debate is open. This windswept island, once a British penitentiary colony, is mainly populated by descendants of the mutineers of the Bounty, Her Majesty’s Ship. It has its own language, Norf’k(or Norfuk), a mixture of 18th century English and Tahitian, their customs and their flag. Despite its valiant past, its self-sufficiency (there are no traffic lights or fast food chains here) and the decades of self-determination, in June 2015 the Australian government proclaimed the end of the Norfolk Island Legislative Assembly and transferred its administration in the hands of New South Wales. The decision to “recolonise” it was not appreciated.

A 79-year-old islander, Albert Buffett, brought the matter to the attention of the United Nations, denouncing the deprivation of rights of the inhabitants of Norfolk, who have never been consulted. Australia replied that “there are no indigenous people from Norfolk Island or an indigenous population on Norfolk Island,” and called the appeal dominated by emotion and full of factual errors. The discussion is currently underway.

In the meantime, travelers heading to this tiny promontory considered geographically, not yet politically, part of Zealandia, will find a wonderful island littered with evidence of the era of settlers and convicts, crossed by a system of hiking trails and surrounded by coral reef. It can be reached with a two-hour flight from Sydney or Brisbane.

Lapped by a turquoise lagoon protected by UNESCO, Grand Terre, the largest island of New Caledonia is divided by a mountain range of ancient Zealand rocks. This small 18,500 square kilometer outpost (7142.8 square miles) in the southwestern part of the Pacific is a paradise made of tropical plants, sandy beaches, perfect waters for diving, many resorts and bungalows.

Like Norfolk Island, New Caledonia is a former penitentiary colony, and officially still belongs to a different continent; remains (for the moment) French national territory. New Caledonia’s independence movement has not yet managed to get the support it needs to cut colonial roots, but a new referendum will be held in September 2020. Despite the political situation, you will fly to the capital Nouméa from Australia or New Zealand.

The landscape of New Caledonia, full of tall conifers such as the column pine, red palms and giant ferns, recalls the dawn of a probable Zealandia. The ciateacee, considered the largest tree ferns in the world, grow up to 20 meters in height, and their fronds are the largest leaves of the plant kingdom.

These species are believed to date back to the coal marshes that covered New Caledonia 275 million years ago. In fact in some languages Kanak, the languages of the natives, the word for tree ferns means “the beginning of the country of men”, and the myth related to the creation tells how the first human beings descended from the hollow trunk of an arboreal fern.

So while those who populate these remote lands discuss politics, geologists seem to have found the necessary evidence that in fact an eighth continent exists. But what is the classification criterion of a continent? It must be large, with physically defined borders, surrounded by water and sufficiently homogeneous from a geological point of view.

Zealandia has almost all these requirements. What makes it different (and it’s the most intriguing aspect, let’s face it) is the fact that it is largely submerged by the waters of the South Pacific. However, if you want to get Zealandia off the list, visit New Zealand, New Caledonia o Norfolk Island, lands emerged from the wonderful potential, although they allow you to see only the tip of this legendary iceberg.