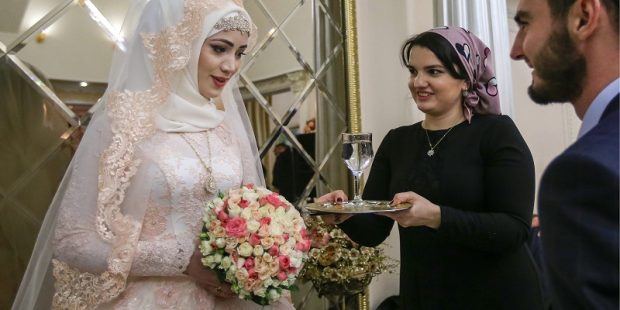 Family values ​​are extremely important for people of Chechen nationality. Therefore, organizing a wedding in Chechnya involves very thorough preparation, because as a result of this celebration a new young family is being created. Modern Chechen wedding is still held in accordance with the most ancient traditions and customs, and the original culture completely enveloped the sacrament of marriage.

Features of the Chechen wedding traditions

According to the wedding customs in Chechnya, certain requirements are imposed on the future bride and groom. To avoid incest, paternal and maternal pedigree lines should be carefully checked. The girl is evaluated comprehensively: the opinion of her acquaintances, friends, and neighbors about the potential bride and her relatives is found out. A fairly significant factor is the financial position of her family. The groom, in turn, must take care of the budget of the celebration, because it is he who will host all his relatives and provide them with various treats. In addition, finance will be needed for matchmaking and redemption of the bride. 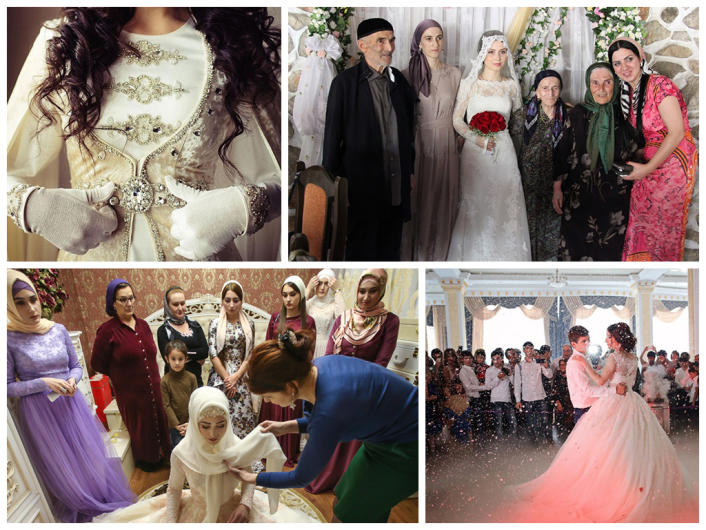 The matchmaking process of the Chechen people is quite peculiar. In case the young man liked the girl, he should give her candy. With such a gesture, the groom expresses his interest and location. If the feelings of the young are reciprocated, then, as is customary, she gives the guy two handkerchiefs. So they exchange gifts two more times, after which the young lady should give the guy an answer. But whatever the girl tells him, the final decision on whether the marriage between the young is possible is still made by her father. 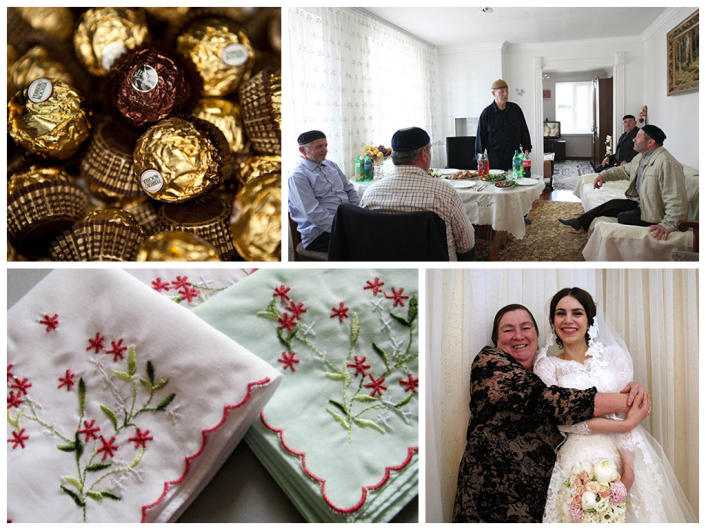 It is wrong to assume that in Chechnya, grooms buy their brides. Of course, kalym is ransom money. However, such a rite has more symbolic meaning. This is an indicator of the generosity and security of the groom and his family. With such a gesture and, of course, the amount of the ransom, they demonstrate how highly they value the bride and her relatives, how much she is dear to her future husband. 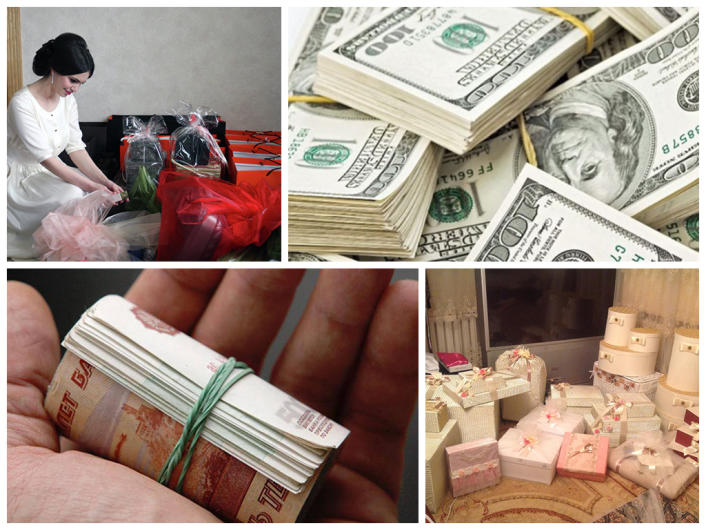 How much money will be needed for kalym, the mullah determines? But the family of the newlywed in most cases gives a sum that far exceeds the established. So the groom once again shows his good intentions in relation to future relatives. 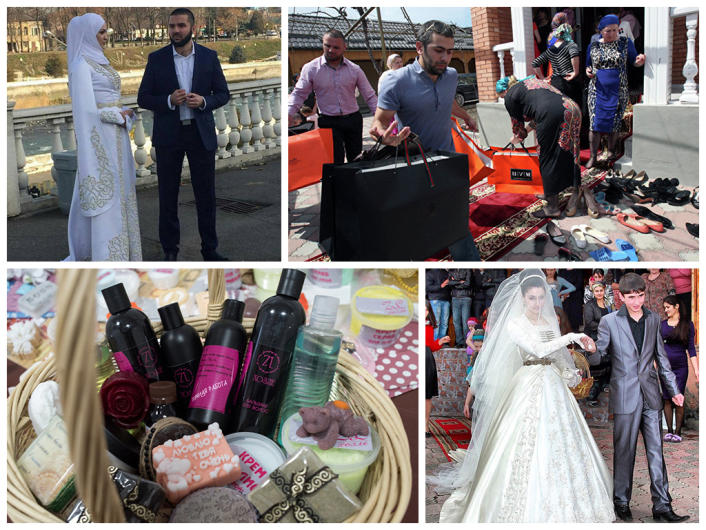 According to the Chechen wedding traditions, before dressing the bride in dress, a symbolic ritual is performed – bathing. Bath is filled with fragrant incense and infusions of medicinal plants, on the body of the girl draw lines. Then the rite called “Chokha” is performed. 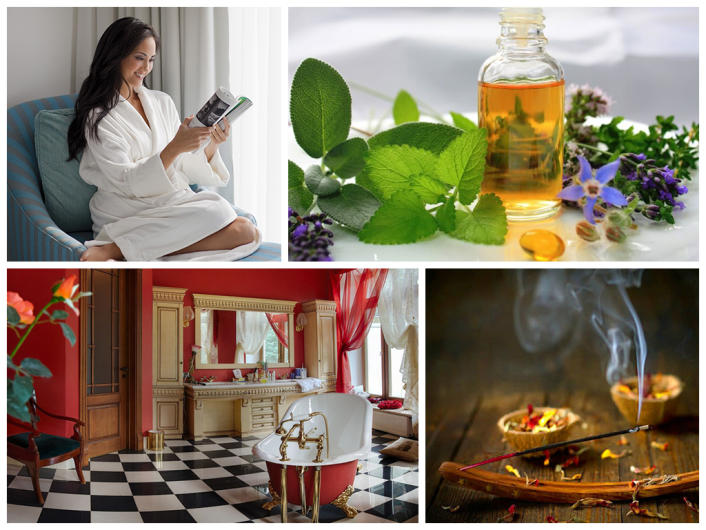 Aunts of the future bride, as well as her friends,  fix a new needle to the hem of the wedding skirt, which should shield the young one from the evil eye and spoilage. Wishing her healthy offspring, women hide bean seeds, corn on the cob and apricot seeds in her dowry. A handkerchief with a ribbon and silver ruble is wrapped inside the girl’s hands. This gift, as well as a needle from the hem of the dress, the bride should keep to the end of her life as a relic.

Then comes the time for redemption. The bridegroom arrives at the house of the bride with friends and relatives. Usually, there is a comic dispute about who owns the future bride. All this is accompanied by laughter and fun. Then the bride with the collected dowry goes to her betrothed’s house, where she remains with her few relatives. 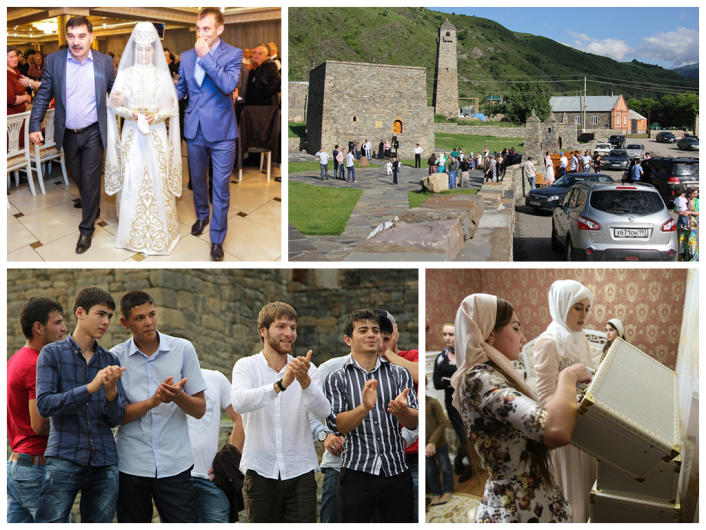 The arrival of the mullah for marriage

Mullah, representing the Muslim clergy, holds the marriage in two places: in the house of the girl and her future husband. In the room, when performing the ceremony, there should be no strangers, only the bride is present, two married relatives and the best man. The room must be equipped with a hearth, around which the best man holds the bride three times. Then he breaks the chain or rope to indicate that the connection between the girl and her family has been broken since then. 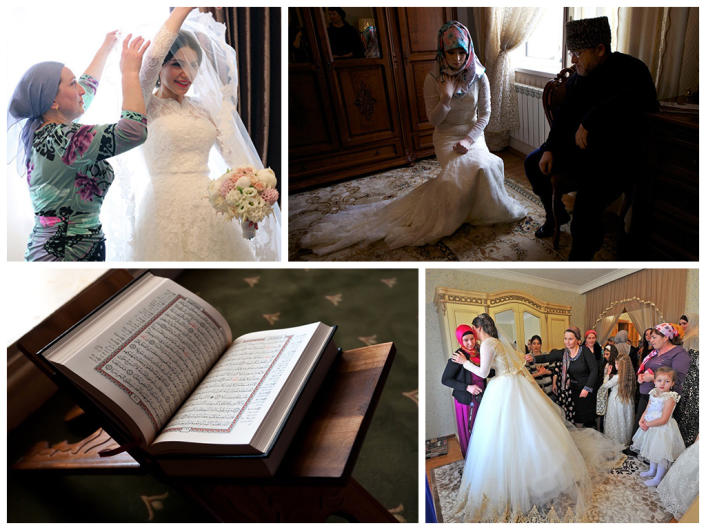 Further, the marriage ceremony of the mullah is held in the newly-wed chambers. There may be two friends or married relatives; in this case, it is not so unimportant. The most important thing is to perform the ceremony until the bride arrives at the groom’s house. When the wedding procession arrives at the abode of the young, it is believed that marriage is already concluded. 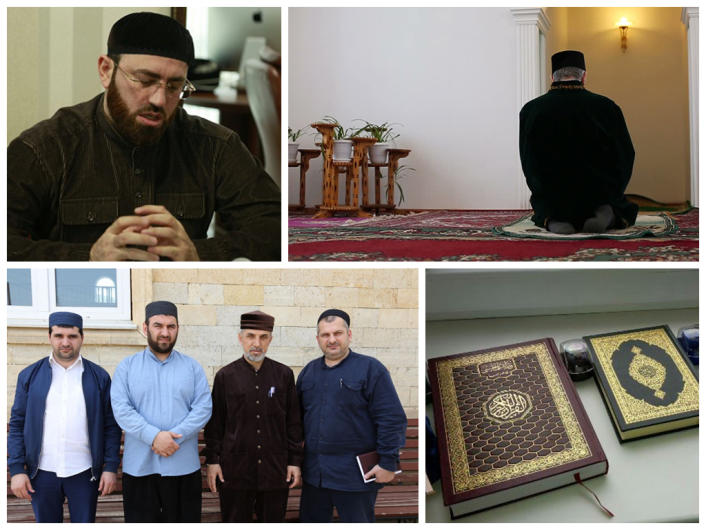 According to the traditions of the Chechen wedding, the solemn train forms the groom. Usually, such a tuple consists of many cars, the most beautiful of which is intended for the bride. The suite of newlyweds consists of the wisest elders, sisters, friends, and mullahs. The whole procession is headed for the bride’s house, where she is met with treats. Then, according to tradition, the ransom and fun wedding dances. A short time later, the motorcade goes to the house of matchmakers to the groom. 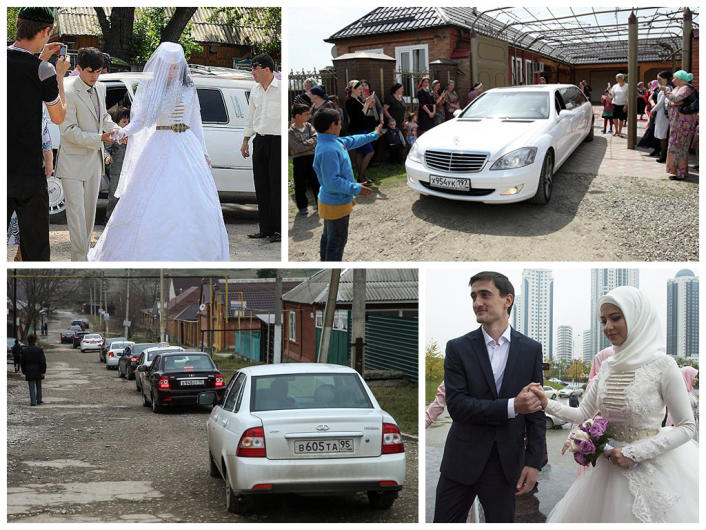 Tradition “Rug with a broom”

As soon as the bride arrives at the house of her betrothed, another test is being prepared for her here. A rug is laid just before the entrance, and a broom is laid next to it. The task of the future wife – do not pass by such a “gift”, just notice the mat with a broom and take them. Girls from the newly-made husband at this time congratulate the young, give her money and sweets. Then they give the groom’s mother a spoonful of honey and butter and give the same to the bride. 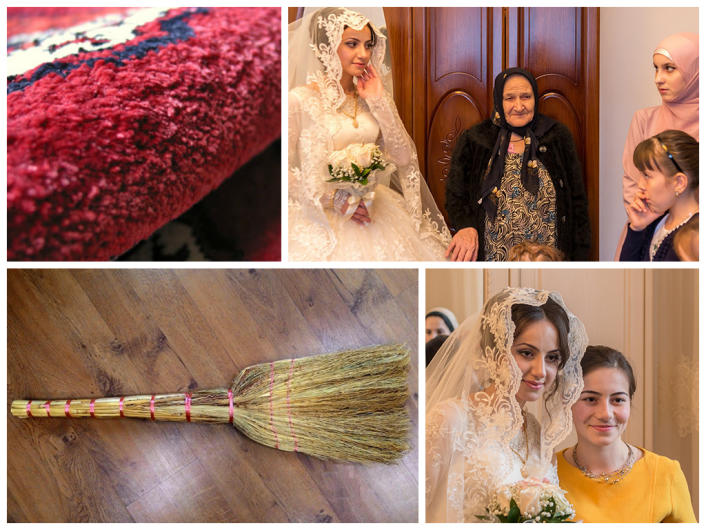 During the celebration of the Chechen wedding ceremony begins, which is called “unleashing the language.” It takes place in the presence of mother-in-law and adult men. The bride takes a bowl of water in her hands and gives it to the oldest person at the celebration. Then she says: “Drink” and then does not say a word. The task of men is to talk young in various ways. The husband is also trying to get the chosen one to utter a word. But the bride should not give in to it, she can speak only after her husband gives her a certain sum of money. However, she then gives the money to her “second” mother.

Tradition lead daughter to the water

Before entering the new family, the bride must undergo another ceremony. The rites of Chechen weddings suggest a ritual of leading the young to the pond. Previously, after the celebration, the newlywed woman, together with her friends, went to the nearest river with a jug. A cake cooked the day before was thrown into the pond, and sometimes it was even fired. Of course, all this was accompanied by fun and laughter. At the end of the ceremony, the bride had to fill the jug with water and bring it into the house. 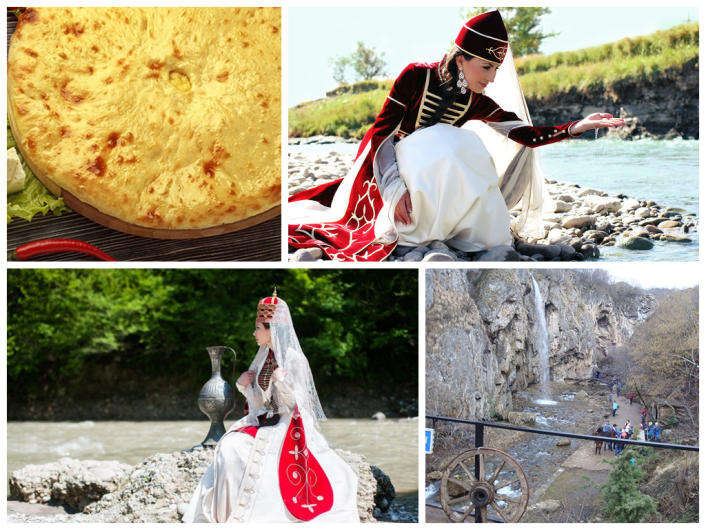 The tradition and rules of the feast of the Chechen wedding

Wedding celebrations in Chechnya continue for 2-3 days. Festivities and feast take place in the yard, despite the weather conditions. During the holiday, the young spouse spends waiting for her husband in the home of one of his friends. The newlywed is also given a special place in the corner of the courtyard, where she must stand for all three days of festivities. If desired, her friend may be next to the girlfriend, but she is forbidden to sit down.

Interestingly, the seating on the holiday occurs in age categories. Elders and parents of young people sit in the center, then, on the one hand, women of the weaker sex are seated, and men are opposite them. The children present, as a rule, do not sit down but stand near the table with refreshments. 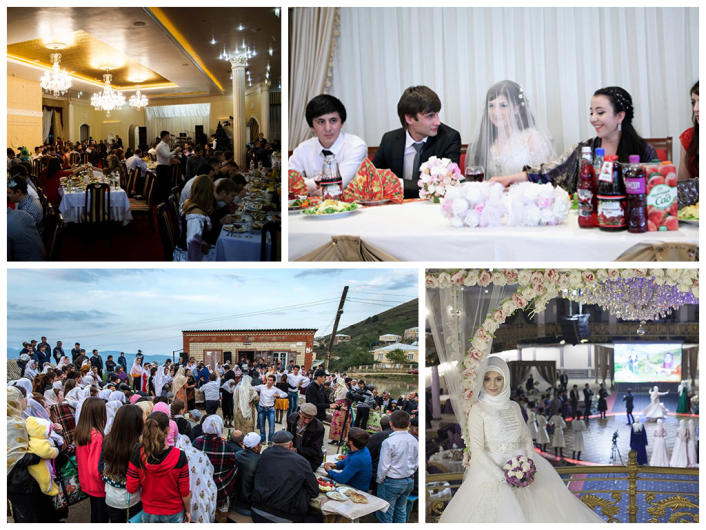 After most of the greetings have been uttered, the dances begin. Around the atmosphere of celebration and fun. Supervises over the celebration of real-toastmaster. At the end of the feast, the mother-in-law removes the veil from her daughter-in-law’s face, she is presented with gifts, and then sent to her betrothed.