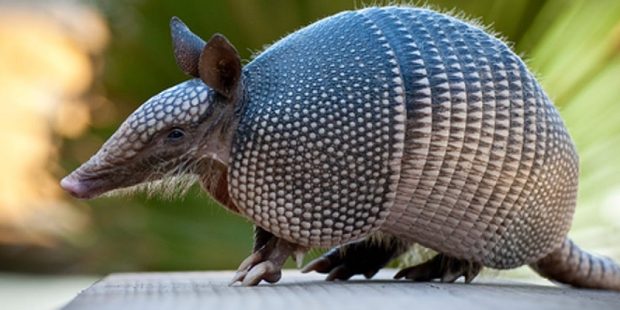 The armadillo is a very particular land mammal that has a reptile tail, mule ears, and a turtle-like shell. He has a triangular head which, like his body, is also covered with a protective plate. In some species, even the tail is protected. Its legs are short and terminated in long claws that allow it to dig the earth and make tunnels and burrows in it. The general color of the armadillo ranges from dark brown to yellowish-brown.

Armadillos’ shells are an excellent method of defense against their predators. It is formed of movable bone bands that allow them to roll up its body, thus avoiding attacks.

Armadillos are solitary animals with generally nocturnal habits, although during the winter they move around during the day because they do not like low temperatures. They live in sandy mountains, steppes with shrubs and tall yellow grasses, where they dig their burrows.

The life expectancy of armadillos is 4 to 16 years but it is affected by the modifications of their natural habitat and by the hunting to which they are subjected because their meat and their shell are of great commercial value.

Their bone armor serves as protection and is widely used in the manufacture of “charangos”, stringed instruments similar to guitars, typical of the Andes and which have great commercial value. In El Salvador, and more particularly in the city of San Alejos. The armadillo is a dish appreciated by some people; its meat can be eaten by humans and is known as the “Seven Meats”. The tail and the shell are used as a remedy: first, we grill them, then we grind them and boil them. Women who are pregnant with their first baby are given this medicine. And when the baby is born, the medicine is also given to relieve the pain. This drug treats ear pain and inflammation and, mixed with armadillo fat, it treats varicose veins.

The armadillo is the vector or carrier of several microbes that cause disease, such as the bacteria that cause leprosy, for example. It is considered to be the depository of the flagellated protozoan of trypanosomiasis Americana (or Chagas disease).